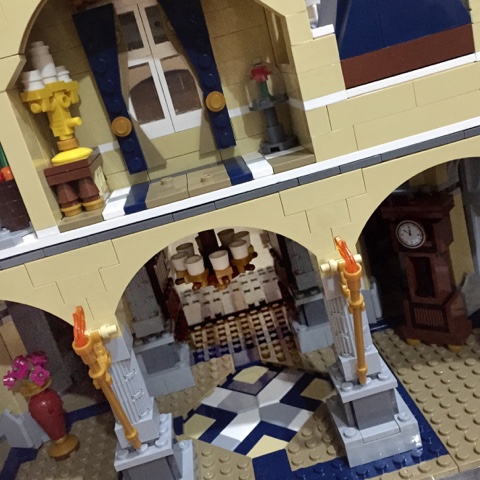 ... my new dollhouse. I didn't play with dolls or a dollhouse as a kid because I had a brother as my playmate. We ended up playing a lot of LEGO which is probably why I am still a fan (or AFOL - Adult Fan Of Lego).

This is the front of my Disney Castle. 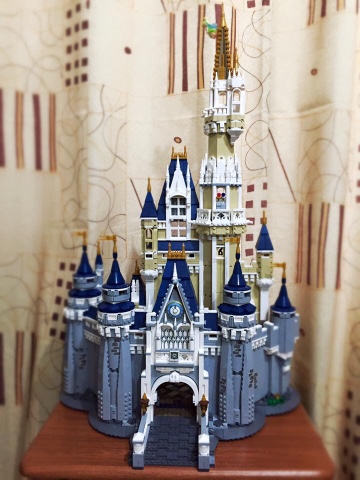 But it is the back that I am loving so much because it is composed of 6 floors of Disney characters' rooms. I love the charming details that tell you whose room it is: (as you can see in the topmost photo) Lumiere & the enchanted rose in Belle's room and the Cinderella ballroom with a cute chandelier & grandfather clock that's a few minutes to midnight.

It's a shame that the recently-released LEGO Disney minifigure collection series only had Ariel and not the other Disney Princesses. So I could not resist custom-making my own (something I learned from Noah here). 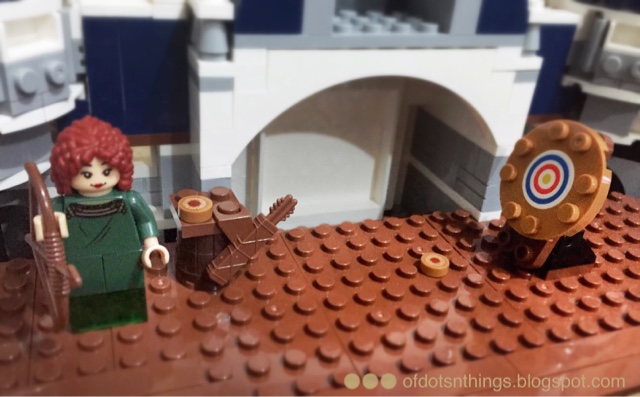 I made a Merida minifig for the Brave section of the castle and a Belle for the Beauty & the Beast room. 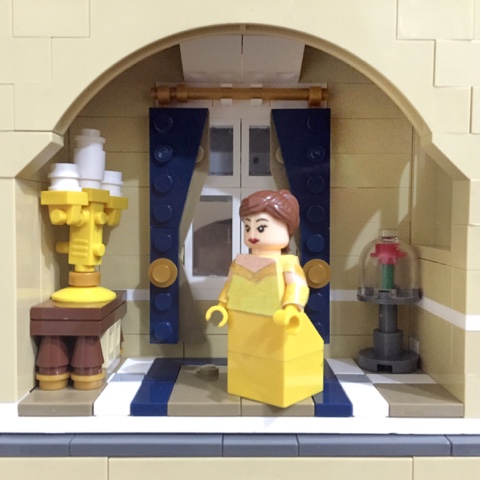 I drew on sticker paper with my colored pencils to make Belle & Aurora's off-shoulder tops. 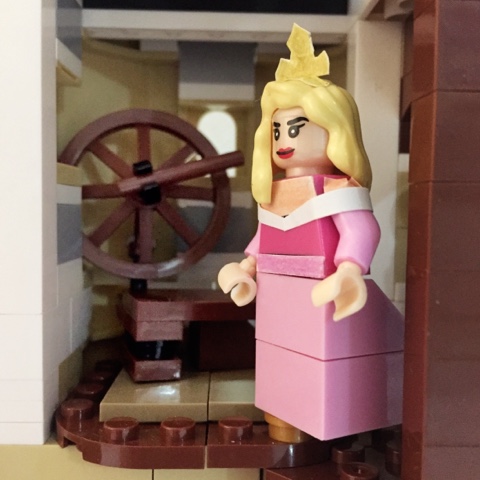 I made everyone's skirts out of 2x2 LEGO bricks - one sloping & one that isn't. 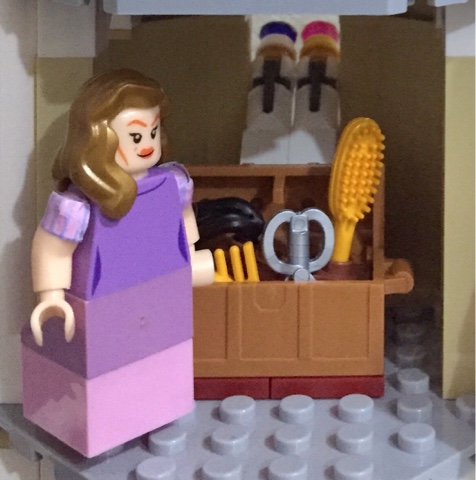 I drew on sticker paper to create the details on the sleeves of Rapunzel & Snow White. I used washi tape for Snow White's headband and a dibidi sleeve for her collar. 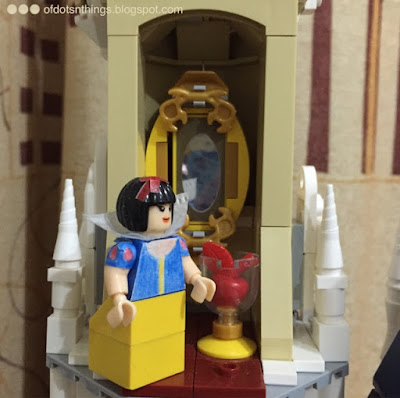 The mirror & the apple came with the castle. But I thought the Snow White room wouldn't be complete without the Evil Queen... 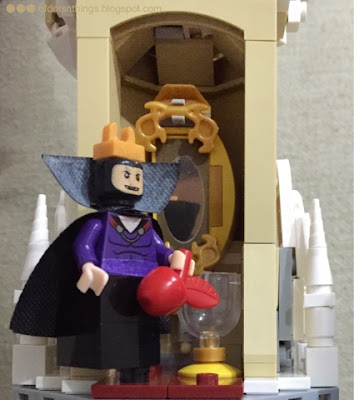 ... and the 7 dwarfs. Couldn't resist making the dwarfs out of tiny LEGO pieces. Dopey's my fave. No beard, hehe. 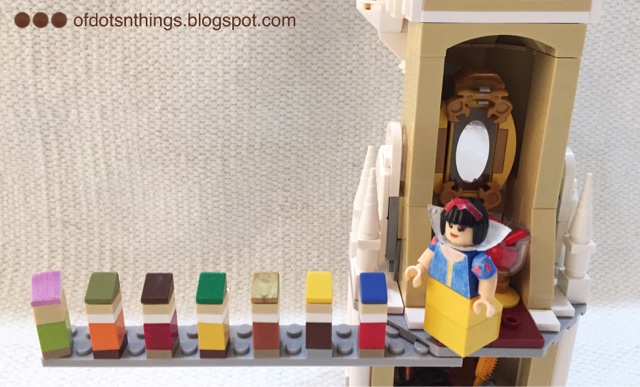 Rapunzel's room came with scissors, a brush and a lock of hair. 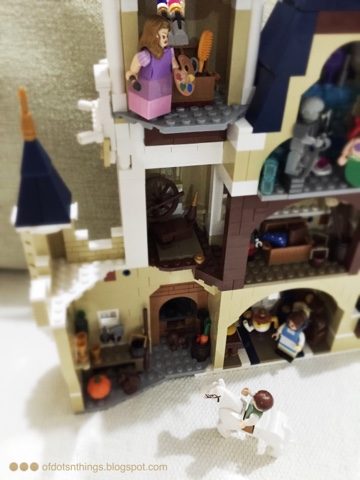 But I got Tangled up in an obsession to add Flynn Rider & Maximus. Oh, and I bought a paint palette & brush for Rapunzel so she can "add a few more paintings to her gallery". 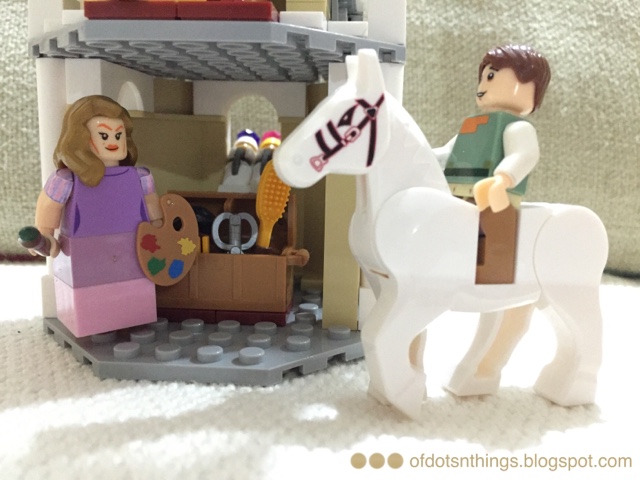 I bought the Alladin & Genie minifigs from the Disney minifig collection series. Hehe, Genie's hanging by a lamp on the flying carpet that the castle came with. 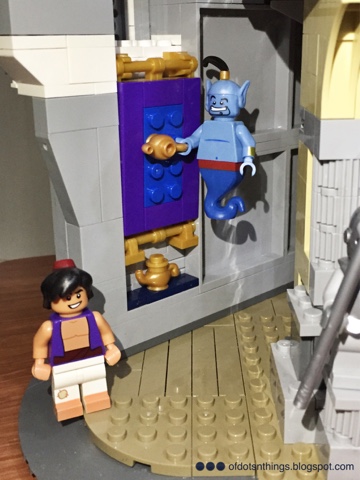 The castle also came with a room for Donald. 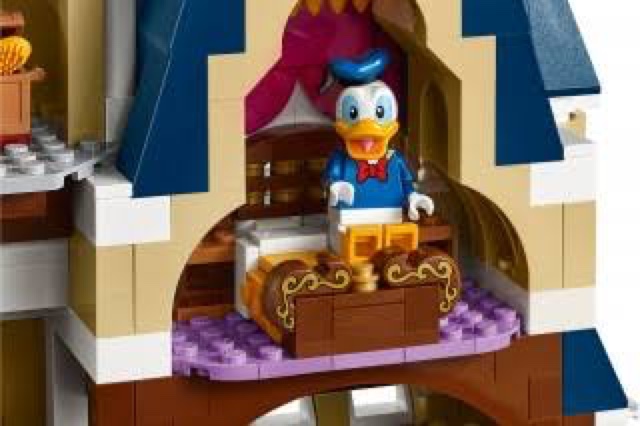 But I'm really not a Donald Duck fan so I converted his room into Ariel's trove with all her thingamabobs and her Prince Eric statue. 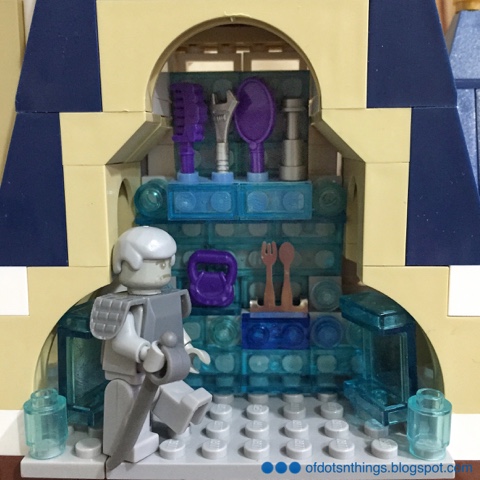 Eventually, I bought an Ariel minifig to complete the Little Mermaid room. 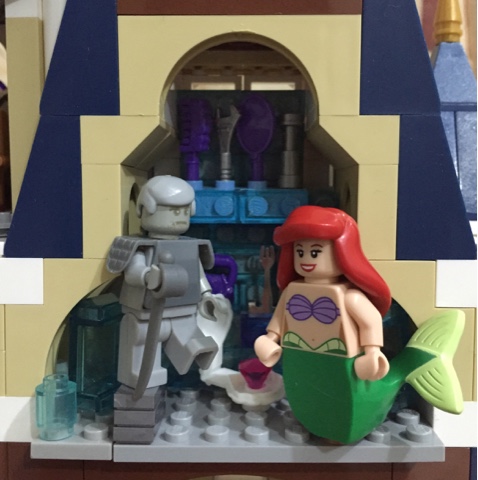 This kitchen was supposed to represent both Little Mermaid (where the chef was trying to cook Sebastian) and Cinderella, with the pumpkin that would later turn into her carriage. 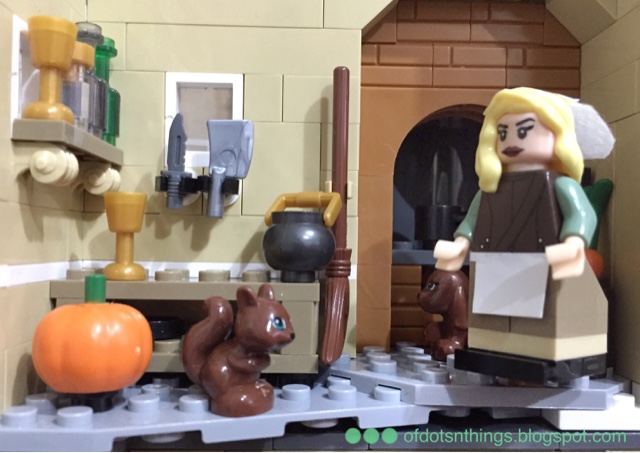 Since I custom-made Ariel's trove, I decided to make the kitchen workhorse-Cinderella's room. I made her headscarf out of a dibidi sleeve, the apron with sticker paper, and added some animal-friends.

I staged ballgown-Cinderella (used washi tape for her headband) and the super cute glass slipper (that came with the castle) on the steps of the castle. 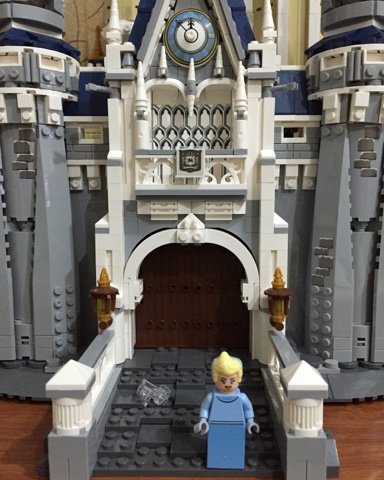 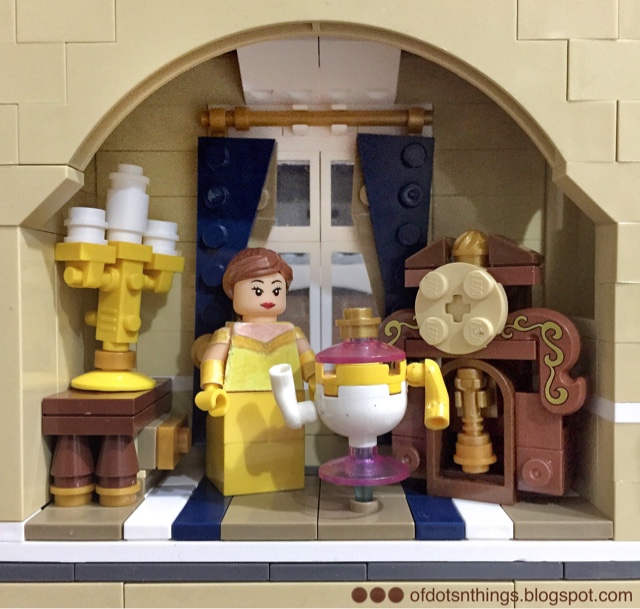 Also couldn't resist making Belle in her Provincial Life clothes. I used sticker paper for her collar & apron and post-it to cover a royal blue sloping 2x2 brick for her skirt. 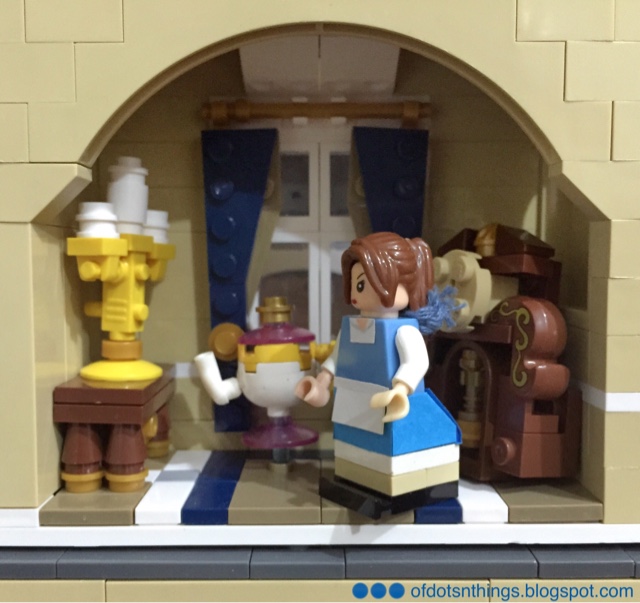 Then as true to playing dollhouse as can be, I moved Lumiere, Mrs. Potts & Cogsworth down to the ballroom where I imagined ballgown-Belle & the Beast were dancing. I made Beast with a monkey hairpiece, LEGO Chima face, LEGO Martian Manhunter's collar for his coattail, and yellow washi tape for his eyebrows, the stripe on his cuff & the tuxedo stripe on his pants. 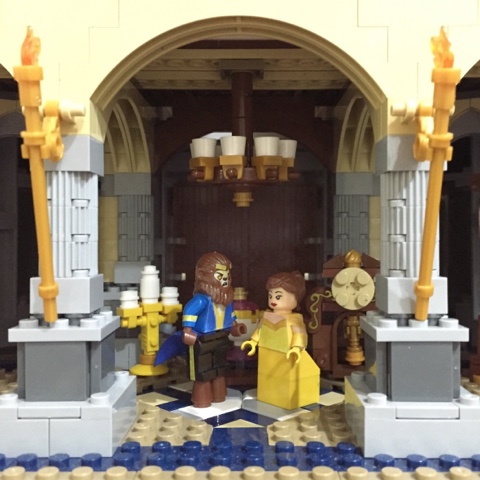 Today, I am loving... playing dollhouse with my Disney Castle and custom-made minifigs.

Click here for previous posts from the Today, I am loving... series.

Photos are my own and from Amazon.
Posted by dots n' things at 7:06 PM
Email ThisBlogThis!Share to TwitterShare to FacebookShare to Pinterest
Labels: Lego, today love, toys

If you promise not to judge, go and see the other side of me on downinthedots.blogspot.com
Or check out how my son Noah connects the dots (Lego dots) in ofdotsnbricks.blogspot.com

dots n' things
Polka dots make me happy. ofdotsnthings is about the things, like polka dots, that make my life absolutely delightful. This is my creative outlet (I think I have a secret dream of being in the magazine world) and my positivity journal (... except when I am down in the dots).